Attempting to shift my physical Manjaro install to VMWare Fusion 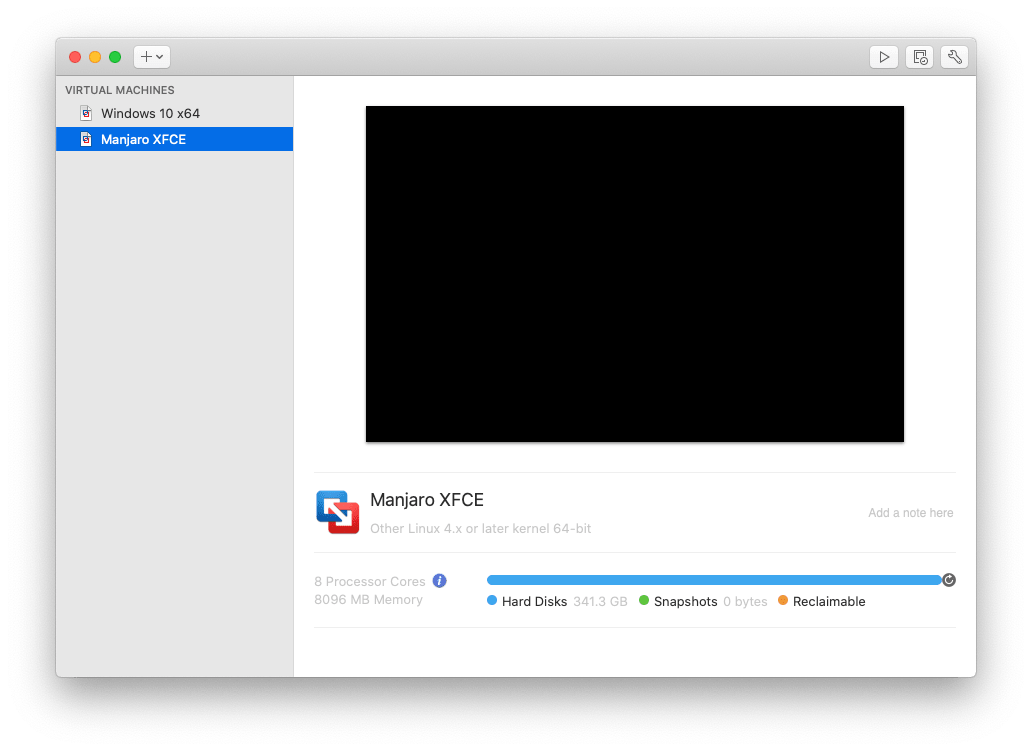 I like virtualisation. It isn’t the silver bullet that can remedy every possible situation but with the fine tuned ability to integrate or isolate an instance and the community that has been built around it, virtualisation proves itself to be an incredibly useful tool.

I am a casual who likes to occasionally game but the bloat on Windows 10 is what drove me to macOS but alas, Catalina strikes and the few games I could play couldn’t run anymore. No Mojave downgrade for me because Xcode 11.

The solution? The tux. Marjaro XFCE (the sweet rolling releases of Arch Linux with the simplicity of Xubuntu), Steam (and therefore Proton), Lutris (and therefore Wine) seemed to be an option that was not “install Windows 10 and deal with it” or “install Windows 7” (my motherboard has no Windows 7 drivers that I can use) or “just get a copy of LTSC and reset the trial every 60 days”.

I dual-booted whenever I could to play but found not being able to switch between work and play instantaneously was a bit annoying.

The solution? VMWare Fusion with generous VRAM. But I don’t want to redo my setup or re-download my library (it took two weeks to download).

So, now I finally had a reason to image my physical ext4 partition and run it on as a guest macOS, without ever reading the files on the partition via macOS.

Presuming you have the Homebrew package manager, we will install QEMU and VirtualBox (even though I will be using VMWare Fusion later because of VirtualBox VRAM limits), so to fetch those packages

Alright, now we have the tools, now let’s first convert make an image of the partition on our external volume

Done? Now, you should verify the integrity of the disk by attempting to checksum match the original partition with our new image

Converting our clone into a virtual drive⌗

Confident we have exactly the same thing? Now let’s get rid of that partition on our internal volume so we can accommodate the new drive. I just used Disk Utility for that.

With that done, now let’s convert our image into a vmdk file that VMWare Fusion can use

NOTE: I am performing this step on the external volume, if you’re satisfied with a monolithic disk image, then you can just write it to the internal volume directly

If you don’t plan on using VMWare Fusion (maybe something like VirtualBox, which requires VMDK files to not exceed 2GB) or you prefer split disk images, then you can convert them to a split image

NOTE: These step is not necessary if you have imaged the entire drive (and therefore all its partitions and volumes) or if you image the EFI partition using the steps above

With our files ready, now we a system drive that won’t boot.

Why? Because the EFI is housed elsewhere (and I can’t image the EFI partition because I changed my bootloader), so we will have to repair that.

Before we do that, we must create a new virtual disk of a gigabyte and boot the VM with both drives. I have made my boot virtual drive NVME and my system drive SATA so I can recognise it easily.

Now, within the live disk, partition our new virtual drive to be a giant FAT32 EFI partition (i.e. with boot and esp flags) using GParted. You may need to initialise a new partition table, if you need to, then select GPT.

We’re not done yet, the bootloader is installed but the UUID of our EFI partition is different from what the physical EFI partition originally had, grab the new UUID (not PARTUUID, simply UUID) and replace UUID value for /boot/efi in /etc/fstab

Edit (18th June): The conversion of the raw DD image to a virtual disk image reduced the image size from 500GB to ~300GB but because I was running short of storage real estate, here is a way of reducing it even further

Unfortunately, one of the downsides of the method I used is that I cannot do any partitioning on my virtual disk because there is no partition table to speak of.

The solution? (at least if you are using a VMWare product and have already installed open-vm-tools) is asking VMWare to figure it out for you.

(Source: How to reduce the size of VMware disk - SuperUser StackExchange)